Vaccine Harm – One other milestone and compensation trending downward

Vaccine Harm – One other milestone and compensation trending downward

In late summer, the National Vaccine Injury Compensation Program (NVICP) reached a milestone no one should be proud of. The total of indemnities and fees paid for injuries and deaths resulting from the flu vaccine has exceeded $ 1 billion. This represents over 25% of the total program spending related to injuries and deaths from the influenza vaccine. This vaccine was only approved in 2005. I wrote about it here.

We are now approaching another milestone, the total number of petitions submitted in a fiscal year. The benchmark was notoriously reached in 1991 with 2,718 submissions and was almost reached in 2003 with 2,592 submissions. In 1991, the program required petitioners to suffer from hepatitis B injuries within a specified time frame. In 1992 the number of petitions fell to 189 and remained constant until 2000.

Only in 2017 did we reach the number of petitions of 1,214 in 2004. And unfortunately, with 1,243 submissions, we have seen a consistent report of annual petitions over 1,200 since 2017. This is due to injuries from influenza vaccination such as shoulder injuries and Guillain-Barré syndrome (GBS).

However, in the current fiscal year 2021, which ends on September 30, 2021, there is a high probability of breaking the 2003 mark of 2,592. It appears that if claims for compensation continue to be filed with the HRSA at the same level as in recent months, the new mark could be 2,600 or higher. Will it break the 1991 mark of 2,718? It is possible? Many petitioners filed in January and February of this year based on the HHS secretary’s proposed rule to remove SIRVA or shoulder injuries and syncope or fainting as table injuries in the NVICP to strike the February 22, 2021 clock.

However, since the Biden government removed this proposed measure, we are still seeing a large number of petitions being filed. Adults are still injured in large numbers. There are some petitions for children, but the vast majority are adults. Lawyers representing injured people are busier than ever. Many lawyers in this field work 80-90+ hours a week.

The downward trend that has gone unnoticed by many is the average compensation amount per grant. It is a compensation for the injured party, without legal and expert fees. And HRSA doesn’t publish that number in their monthly statistics report. 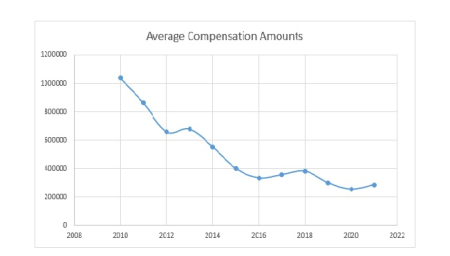 Why the dramatic decline? In my opinion there are several reasons.

Other worrying trends that are emerging may be discussed over the next year. It is a never-ending, sometimes insane observation of a federal judicial system that has turned its back on children and their parents.

Finally, during the last ACIP committee meeting in May 2021, there was a vote and overwhelming approval with no studies, reports or documents to support the vote to combine COVID vaccines and children’s vaccines during the same doctor’s appointment. Now, if a child is injured from being given a COVID vaccine and Gardasil, how and where do parents go for compensation? COVID vaccine violations are currently part of the CounterMeasures Injury Compensation Program (CICP) and Gardasil is part of the NVICP. Can an infringement lawsuit against Gardasil that caused GBS succeed in the NVICP, or will our government claim that the infringement petition in the black hole known as the CICP should have been pursued?

Also hosts the Right on Point podcast which will discuss your civil liberties, freedom of health, legality of possible mandates, passports and restrictions related to the COVID pandemic policy.