Superintendent Presents ‘State of the Faculties’ and $181.33 Million Funds to Board of Training – We-Ha

Superintendent Presents ‘State of the Faculties’ and $181.33 Million Funds to Board of Training – We-Ha

While the nation prepared to hear the president’s State of the Union Address Tuesday, the West Hartford Board of Education received a more localized “state of” address, as Superintendent Tom Moore presented the “State of the Schools” along with his proposed budget for the 2022-2023 academic year.

“The budget document and the development of the budget is for the future,” Moore said. “If you want to find out about district, a town, a country’s priorities, look at how they spend their money.”

The roll-forward budget – looking at keeping the exact same programs and services and the exact same number of people next year as this year – would result in a $7.22 million (4.1%) increase due largely to salary increases that are part of negotiated collective bargaining agreements, changing benefit costs, contractual transportation costs, increased special education services, and tuition cost for outplacement, as well as the impact of inflation.

The budget proposed by Moore Tuesday has trimmed $2.2 million, or 1.3% from the roll-forward budget.

Before outlining plans for the future year, Moore provided perspective through an overview of the current state of the district’s schools.

State of the Schools

Moore’s PowerPoint presentation (see PDF below) started off with an inventory of the district’s buildings – when they were built and when, or if, they were renovated.

“We have buildings that are approaching their 100th birthday,” Moore said, and while Charter Oak International Academy (2016) and Bristow (2005) are new buildings, the third-youngest building – Hall – is the same age as he is, said Moore, who turned 52 last week. “You can track the history of West Hartford by tracking when the schools are built,” he said, and it also shows migration patterns through town.

The pandemic has had an enormous impact on the state of the town’s schools over the past two years. “We’re in a period that we hope is a very extended down period of COVID-19 … but we prepare for mitigation strategies if that is not the case,” Moore said. The West Hartford-Bloomfield Health District and school nurses have been involved in the tracking of roughly 7,000 exposures and 2,900 positive cases. They have distributed more than 52,000 masks – and have more available if anyone wants one.

More than 16,000 COVID tests have been conducted since October through the state Department of Public Health’s Project COVID DeteCT, Moore said, and the district is continuing the program with 900 tests per week still being conducted and the program expanded to include staff. Self-tests have also been distributed and more are available as well.

The district currently has 9,018 students, and while enrollment is projected to decline, Moore said he wouldn’t be surprised if the trajectory is flatter than what has been predicted, since families with school-age children continue to move into town.

The school population has become increasingly racially diverse since 2000, Moore said, with the percentage of white students in the district decreasing from 72.4% to 56.4%.

In 2000, 13.2% of West Hartford Public Schools students were eligible for free or reduced lunch, and in the current year 25% are eligible. That number is likely artificially low, Moore said, because during COVID-19 a federal program has provided lunch free of charge to all students and some families may not have felt it was necessary to fill out the paperwork.

To qualify for free lunch, a family of four must have an income of $34,450 or less, Moore noted, and an income below $49,000 for a family of four qualifies for reduced lunch. Between a quarter and a third of West Hartford students meet that criteria, he said. “We have significant need in this community … if kids are not fed learning becomes impossible.”

The percentage of English Language Learners has increased from 4.5% of students to 6.5% of students since 2000, Moore said, and 24% of students come from households where English is not the primary language.

There are currently 77 primary different languages spoken in the homes of West Hartford students, and in just the past six years the number of Arabic speakers has more than doubled. “I will be shocked if don’t see that as a language taught in our middle and high schools,” Moore said. There has also been a large influx of families who speak Portuguese and Nepali, and the category of “all other” includes far more languages than it did 20 years ago.

The district is making progress at increasing the diversity of staff, hiring people of color accounting for at least 25% of new hires of certified personnel. Including non-certified staff, the percentage is even higher, and while the overall incremental growth of staff diversity is slower due to the number of overall employees, efforts are beginning to have an impact.

“One of the things that has shifted over time … it has been a dramatic 10-year shift in special education,” Moore said. Prevalence has grown in the state, and in West Hartford 17.5% of students receive special education services.

The growth in the number of students, as well as the number of programs and the intensity of special education services, is a significant driver of the school budget. There is also an expansion in public school responsibility for services – including for children in pre-K as soon as they turn 3 and for post-secondary students through their 22nd birthday (formerly through age 21). The district is also responsible for management of 114 Individualized Educational Programs (IEPs) for West Hartford students who attend private, parochial, and magnet schools.

Curriculum demands – including the increased number of credits required for graduation – mean that the district is required to offer more courses, and that impacts the number of staff, Moore said.

Lowering class size “has been a focus of every board of education since I have been superintendent,” Moore said, and while federal funding has helped keep class sizes smaller during the pandemic, that will continue to be a pressure. Overall, the average class size has dropped from 20.7 in 2000 to 19.7 currently.

“AP equity and excellence over my career is something I’ve talked about … that we should be having challenging coursework,” Moore said. A rigorous high school experience is one of the most important predictors of college success, he said.

With 77% of students who take an AP test scoring a 3 or better, “we are so far above the state average, so far above the national average, and what’s stunning about that is we have opened up our courses to everyone,” Moore said. The value of college credits that students earn in a year through AP, UConn Early College Experience, and Capitol Community Prep courses, if you estimate what would need to be paid on a per credit basis, is worth almost $6 million, he said.

The four-year graduation rate is currently 95.2%, Moore said, and that’s with the increased number of required credits. While the goal is 100%, he said, “That is an exceptional number for any district the size of West Hartford that looks like West Hartford.”

Moore highlighted just a few of the recent accolades earned by staff and students in academics, athletics, and the arts. 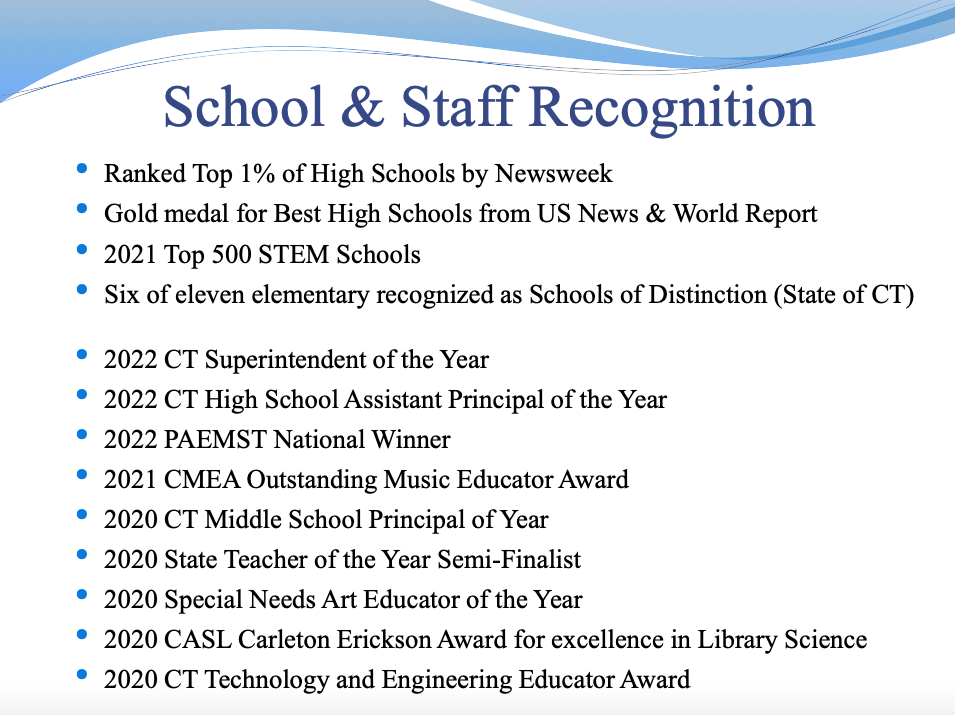 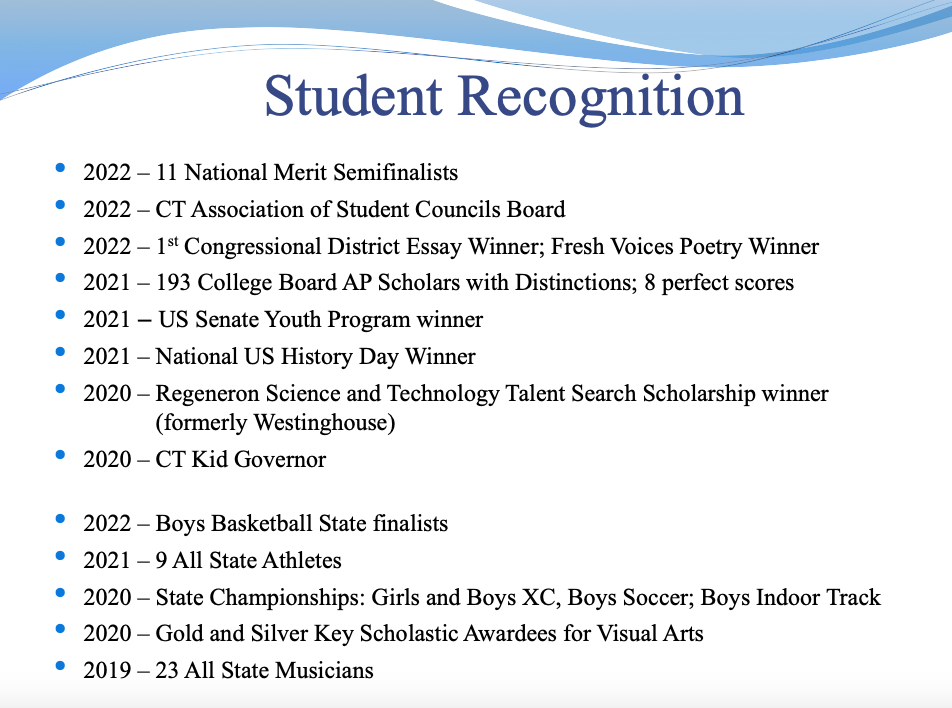 “Where are we going …” Moore said.

West Hartford Public Schools has 9,108 students in pre-K through post-secondary – which translates to roughly 1.9% of public school students in the state. The district receives just 1% of Education Cost Sharing funds. 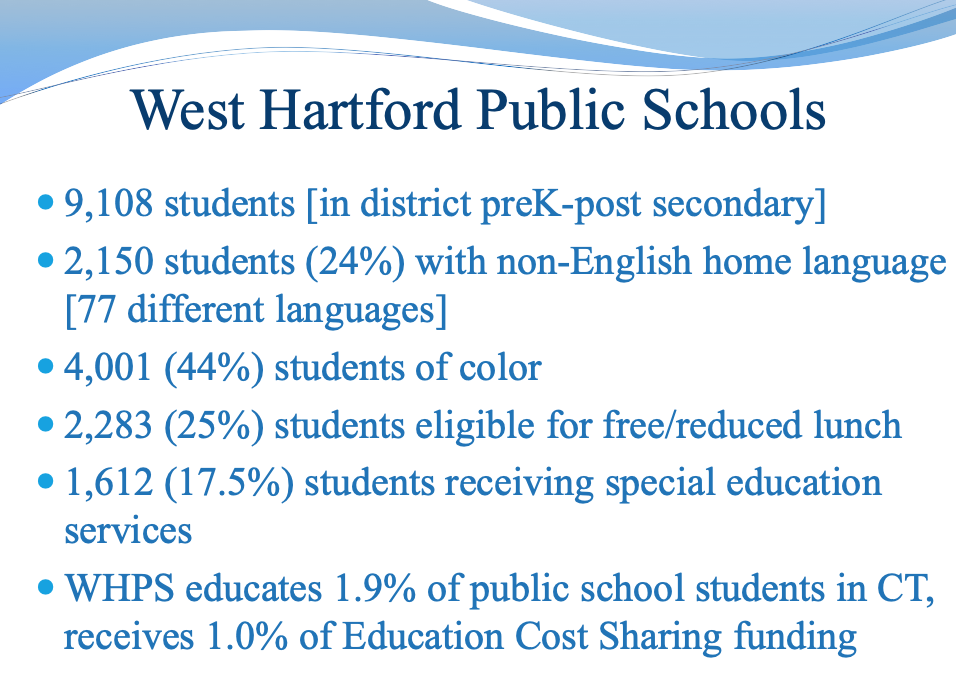 West Hartford most recently was ranked 100th based on per pupil expenditure, and Moore said while he has been proud of the district’s efficiency, the ranking is no longer declining due to the recognition of unique needs.

West Hartford’s current expenditure per pupil of $19,155 remains lower in comparison to DRG B – which includes nearby Farmington Valley towns as well as towns like Greenwich and Fairfield. Spending at the DRG average of $19,428 would add $2.6 million to the budget, and spending at the state average of $19,832 would add $6.3 million.

Why do people want to live in West Hartford, Moore asked. “It’s not the restaurants, no matter how lovely they are. It’s the schools.”

Salary and benefits are 83% of the total West Hartford Public Schools budget, and proposed salary and benefit costs are up by $4.3 million, or 3.7%. If you want to save money, it means cutting people or programs, Moore said. 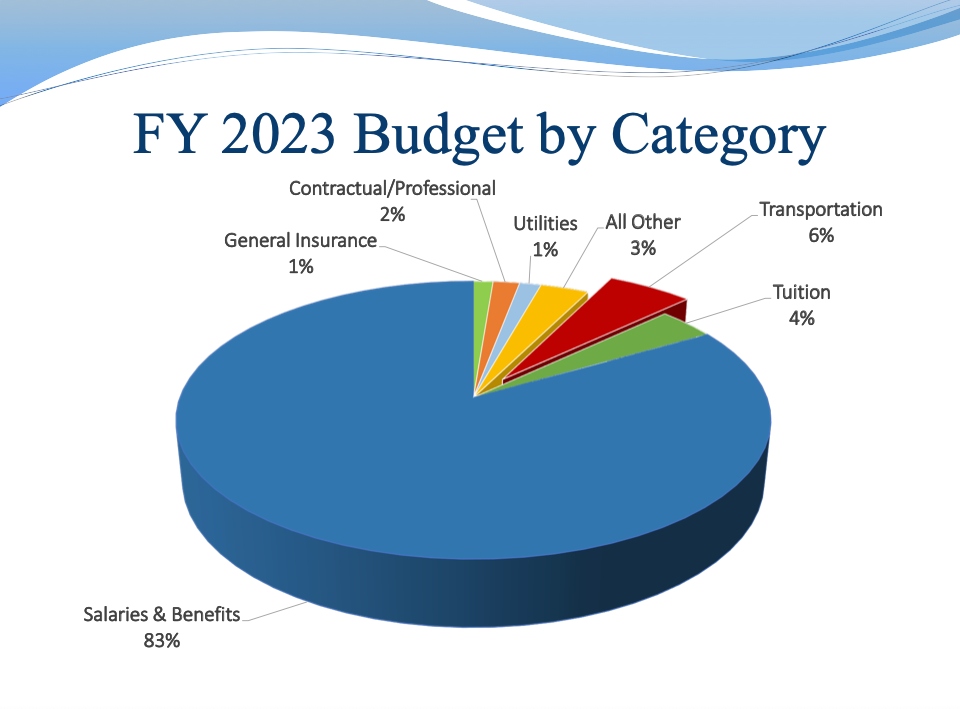 “The proposed budget includes an additional post-secondary teacher, offset by the reduction of eight full-time equivalent positions, primarily due to anticipated enrollment at the high school level,” Moore said in the executive summary to the budget presentation.

Medical costs are budgeted to increase by $1.76 million or 7.65%. Moore said the increase appears to be an outlier this year, influenced by a delay in medical care during the pandemic. The State Partnership Plan, which the district joined a few years ago, has been cost effective in past years.

Pension and benefits costs have decreased by $290,000, impacted by a decrease in contribution to the town pension plan following the sale of Pension Obligation Bonds.

Transportation expenses are up $640,000 (6.79%) due to a cost escalator in the contract, plus additional buses required for special education students.

Tuition expenses are projected to increase by $810,000 (13%) driven by the number of student outplacements, increasing tuition rates, and the cap in state reimbursement.

“We take our obligations to our taxpayers very seriously,” Moore said, listing modifications that have been made to the roll forward budget.

Enrollment changes, particularly impacting the high schools, allow for a reduction of 6.8 full-time equivalent positions, and a savings of $670,000. The need to hire another staff member for post-secondary instruction, however, adds back $90,000.

Proposed budget changes for “policy and economic factors” add $140,000. That includes a request to increase the pay of teaching assistants by $20 per day. “We have had trouble with those positions, filling those positions,” Moore said, occasionally having to contract out for employees which is even more costly. He is also proposing an increase of $10 per day for substitute pay.

The increased expenses, however, will be offset by $440,000 in additional funding the district will receive from the state for its Open Choice students following the recent Sheff vs. O’Neill settlement. “West Hartford is a proud partner with Open Choice,” Moore said, with more enrolled students than any other district and a longstanding partnership with Hartford.

The largest proposed offset to the roll forward budget is an overhead reduction of $1.75 million by utilizing funds from the district’s health insurance reserve to offset the projected premium increase. If the premium increase ends up being lower than expected, the use of the reserve will be adjusted accordingly.

The overall proposed budget increase of 2.8% is far lower than the inflation rate, Moore said.

He asked Board members, if they are considering significant cuts, to provide that information prior to the first public hearing on March 23 so that staff can be aware of the possibility of their positions being eliminated. “It’s only fair to our staff members who give so much to us,” he said.

While the Board of Education decides what to spend, he noted, it is up to the Town Council to allocate the funding. The Council, however, cannot alter specific line items but only the overall district budget.

“As always this is intended to clear the paths of our students that need bright futures, and we don’t put a limit on it,” Moore said. While finances can sometimes put a limit on students, he said that rarely happens in West Hartford.

Upcoming public meetings related to the Board of Education budget include:

The detailed budget is available on the West Hartford Public Schools website. Suggestions can be sent to [email protected].

Acting Town Manager Rick Ledwith will be proposing the town’s overall Fiscal Year 2022-2023 budget on Tuesday, March 8. That meeting will begin at 7:30 p.m.

Like what you see here? Click here to subscribe to We-Ha’s newsletter so you’ll always be in the know about what’s happening in West Hartford! Click the blue button below to become a supporter of We-Ha.com and our efforts to continue producing quality journalism.