“So, have you found any autism in Africa?” the wealthy philanthropist asked, peering over his wine glass.

It was 2012, and Petrus de Vries had just returned to South Africa after 20 years abroad. The University of Cape Town, where he had been hired to set up an autism research center, was hosting a cocktail meet-and-greet with some of its biggest financial backers.

De Vries knew autism awareness was lacking in his home country, but being reminded of that ignorance at the party only sharpened his mission, he says. He didn’t want to just build a research center. “I came back to Africa to build African knowledge and understand African needs, so that we can come up with African solutions to autism.”

Over the past decade, he has made tremendous progress toward that goal. Today, de Vries’ Center for Autism Research in Africa (CARA) is the continent’s largest and broadest in scope, covering screening, diagnosis and intervention. Its staff of 20 scientists publish 10 to 20 papers per year, a big step up from the total of 28 peer-reviewed autism papers published by South African scientists as of 2017.

Innovation is at the heart of CARA, de Vries says, because autism tools and treatments imported from wealthy countries aren’t guaranteed to work in lower-income ones — partly for social and cultural reasons, but also because of a lack of resources. “You have to think about how to work differently,” he says.

For example, trained specialists are too expensive and scarce in Africa to meet the needs of families, so de Vries is studying ways to train non-specialists — parents and community health workers — to deliver autism services, particularly in rural and other underserved areas. Similar solutions could also improve access for many communities in high-income countries, he says.

“Petrus has been instrumental in raising the profile of autism research and clinical care in Africa,” says Lauren Franz, assistant professor of psychiatry and global health at Duke University in Durham, North Carolina, who has worked with de Vries for the past seven years , most recently as a mentor for early-career autism researchers in Africa. “His dedication to working collaboratively to address the numerous challenges autistic individuals and their families face on the continent is remarkable.”

It has taken a lot of hard work, and it is far from done. As De Vries, 54, likes to point out, the vast majority of autism research — and nearly all the insights into how best to support autistic people — comes from wealthy countries. But, he says: “Most people with autism don’t live in rich countries. They live in poor countries. And we have an enormous task to figure out what it is that they need.”

In a bubble: Insights about how best to support autistic people tend to come from wealthy countries, de Vries notes, yet most people with autism live in poor countries.

After graduating from high school in 1985, de Vries studied medicine at Stellenbosch University in the Cape Winelands. He found the subject dry — until he embarked on his first course, which happened to be on brain development and pediatric clinical disorders.

That course piqued de Vries’ interest in part because his younger brother has developmental disabilities. His brother had attended a school for children with intellectual disabilities, where the teachers were reluctant to even try to teach him to read and write, says de Vries. (He later diagnosed his brother with autism.)

“The plan was to quickly go to the UK for a few years to train and then come back,” de Vries says, with a rueful smile. But after he finished his clinical training in 1997, he stayed in the UK to complete a Ph.D. in developmental neuroscience at the University of Cambridge. And in 2001, he returned to the NHS, where he created and led a program for school-aged children with neurodevelopmental conditions in Cambridge, one of the first in England, he says.

While working as an NHS consultant, de Vries also researched tuberous sclerosis complex (TSC), a rare genetic condition that is often accompanied by autism and epilepsy — a project he had started as a graduate student. As part of those efforts, he led the development of a checklist for screening people for tuberous sclerosis associated neuropsychiatric disorders (TAND).

The narrow focus of his work at the time was typical for researchers in the UK, he says: “When you are in a high-income setting, the expectation is very much to focus on a tiny little thing.” But his work from this period was not without significant impact: He was closely involved in research that led to the development of m-TOR inhibitors, a class of immunosuppressive drugs approved in 2018 to treat TSC-linked epilepsy.

One day in 2011, a colleague named Dan Stein called de Vries out of the blue. Stein, who was head of the University of Cape Town’s psychology department, invited him to apply for a vacant post in child and adolescent psychiatry. De Vries was hesitant. It wasn’t clear how returning to South Africa fit with his immediate research goals. But after thinking about it, he realized that autism is everywhere, yet hardly any autism research was taking place on the continent of his birth. He felt an obligation to fill that gap.

De Vries understood that to make the move, he would have to shift gears and confront some tough challenges, including the lack of awareness of autism, paucity of data on its prevalence and scarce resources in Africa. Yet he thought his expertise, as well as his vast connections to scientists and doctors, could help him bolster autism research on a continent where the need was great. He decided to apply. 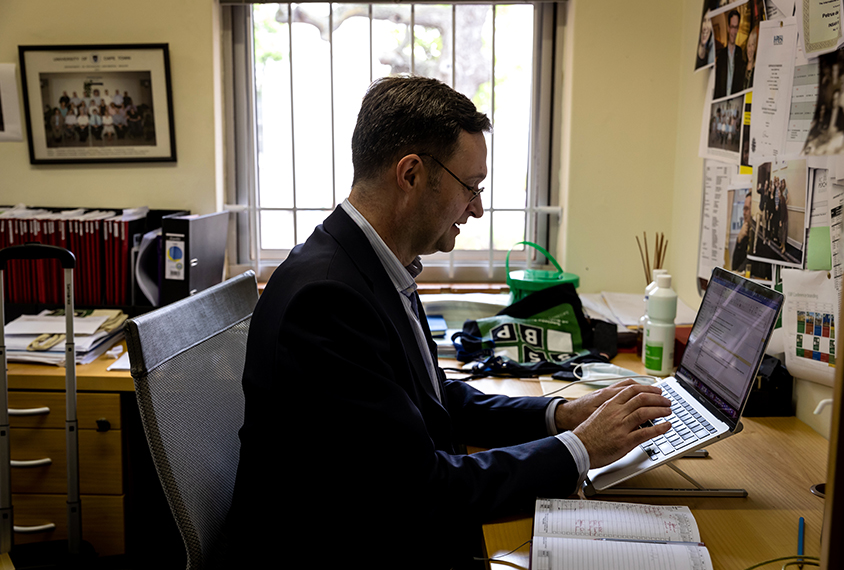 Homecoming: Upon his return to Cape Town, De Vries partnered with local services to understand what autistic African people need and how best to focus his research.

In early 2012, de Vries relocated to Cape Town. In some ways, he says, it felt like home, but in others, a fresh start. “I knew the city like the back of my hand, but I knew nothing about the [health] system and the services,” he says. People he engaged with professionally questioned his ability to understand their context and needs. “It took me a while to realize they were right. I needed to integrate and stop being a foreigner before I could really start to engage with communities.”

Part of this transformation involved working with South Africa’s departments of health, social services and education, among others, to make sure that policymakers put his team’s findings into practice. More than once, he ran up against a striking lack of awareness. He recalls having to repeatedly remind one civil servant with whom he was working to set up an intervention program for autism, about the difference between autism and albinism. “That was a real eye-opener,” he says.

Embedding himself locally also meant reaching the fledgling family groups and organizations that advocated for people with autism and other developmental conditions. He knew these families were vital to helping him decide how to focus his team’s research and maximize its impact. He also wanted to help them collaborate and speak with one voice. “When you have limited resources, the risk is that the fight for resources becomes parochial,” he notes.

De Vries joined the board of Autism South Africa, a national organization that raises awareness and supports South Africans with the condition. He invited people from the organization to help him design and execute some of CARA’s research projects, including one that tested a World Health Organization (WHO) caregiver skills training program in South Africa. “That’s how you make sure that the questions you ask are questions that are relevant to families that live with all the challenges on a daily basis,” he says.

De Vries gave the organization a new perspective as well, says Juliet Carter, Autism South Africa’s national director. She remembers de Vries saying at a meeting of the WHO project in December 2019 that a child can get all the interventions in the world — speech and occupational therapy, physical therapy and so on — but if the child then goes back into a community that doesn ‘t understand autism or include autistic people, that child’s opportunities are still limited. To Carter, it underlines how much work still needed to take place within communities.

“He can see the bigger picture before you can see it, and remind you of what you are working for,” Carter says.

In addition to collaborating with local health services and stakeholders, to build CARA, de Vries has had to recruit his own staff — including psychiatrists, psychologists, nurses and teachers. “I came with zero staff, and the first step was to just connect with people in the country who were interested in autism research,” he says.

Few could afford to be researchers full time; many earned a living as doctors or teachers. Some approached de Vries even before he had a budget to pay them, and some members of his team, including clinicians, still donate their time.

De Vries’ connections with the global autism research community were an obvious draw for recruits. CARA collaborates with colleagues in 31 countries, overcoming the isolation from global scientific networks that de Vries says researchers in low- and middle-income countries often experience.

“As a boss he’s extremely generous in sharing his knowledge and connections,” says Liezl Schlebusch, a CARA researcher who runs the South African arm of the WHO caregiver skills pilot program. Before the COVID-19 pandemic, the project took her to China, Canada, Russia and the Netherlands, where De Vries’ contacts “opened the door,” she says. 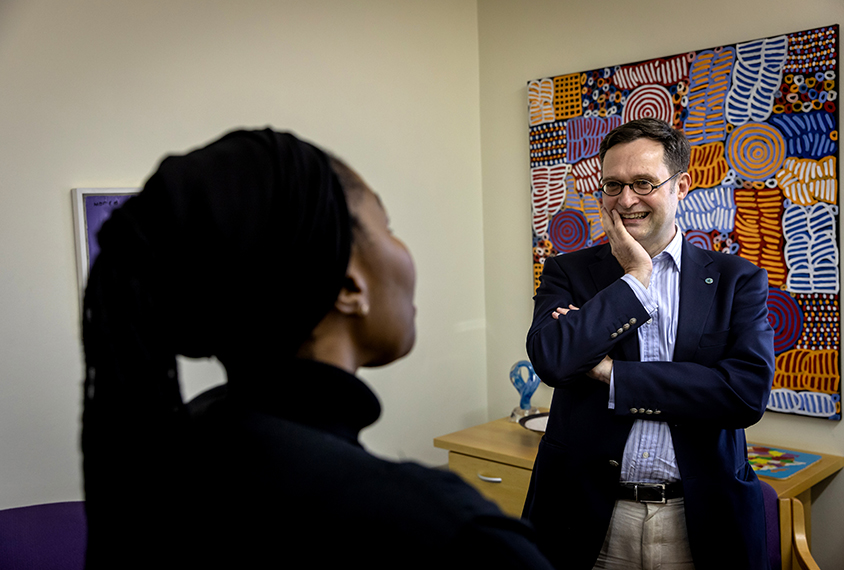 Professional web: De Vries collaborates with a network of other autism researchers, including Papani Gasela, who heads the clinical unit of child and adolescent psychiatry at the Red Cross War Memorial Children’s Hospital in Cape Town.

As part of that program, Schlebusch has adapted for local use an online module to improve the well-being of caregivers who have been isolated and under added strain during the pandemic, de Vries says. South Africa’s strict lockdowns were “awful” for the families of those autistic children who need physical exercise to thrive, he says. These concerns are hardly limited to South Africa, and CARA researchers are hoping to test it with caregivers in several other countries, in Africa and beyond. Other CARA projects include an evaluation of standard diagnostic tests for autism in South Africa and the rest of Africa, and comparing the experiences of autism caregivers in high-income countries with those of caregivers in low-income countries.

Through all of these initiatives, de Vries has learned to do research on a shoestring budget — or no budget at all. It’s a skill that often baffles his colleagues in the United States, he says. He tells his mentees: “You can ask important questions without money.”

Coming back to South Africa made de Vries realize how much he loves creating new organizations and mentoring the staff needed to run them. Yet the plan was never to “build an empire,” he says. “My job is to build the next generation of people who can do and grow research and services in Africa.”