Past the Bench: A dialog with Tonya White | Spectrum

Past the Bench: A dialog with Tonya White | Spectrum

She switched academic disciplines several times and after a career change she moved across an ocean. After earning her MS in Electrical Engineering from the University of Illinois, she switched gears and went into medicine. Fifteen years later, she was a child psychiatrist at the University of Minnesota when she decided to return to engineering – this time the biomedical kind – and re-enter graduate school. And in the middle of that Ph.D. Program she moved to the Netherlands to set up a neuroimaging program at the Erasmus University in Rotterdam, where she is still working.

Her lifestyle reflects her dynamic career path. In winter she goes cross-country skiing and sails when she gets her hands on a boat. In the middle of the pandemic, she went on a nearly 1,000 mile “bikepacking” trip through eight countries. And after sitting more than usual with back pain in the past year, she added walks, bike rides and as many outdoor meetings as possible to her day.

As an associate professor of child and adolescent psychiatry, White, now in her 50s, studies how the uterus and early life experiences affect brain development and contribute to conditions such as autism. She spoke to Spectrum about the routines she wants to maintain after COVID-19, the art she created from crushed clams, and how her father instilled her love for science.

Spectrum: When did you first become interested in science?

Tonya White: My parents started me. When I was 8 or 9 years old, my dad would order these little blue kits for me once a month. Each would be a science project – experimenting with electricity and things that you would mix together to make different chemical substances. I thought they were really cool. Like solving puzzles.

So the question is, does the underlying neurobiology match the traits? Do you see a similar spectrum in neurobiology as in the behavioral phenotype? And if so, what does this mean for how the combination of different genetic effects affects a person’s likelihood of autism?

The other possibility is that the underlying neurobiology doesn’t fall on a spectrum, even if the behavior does. They have no changes in the brain up to a certain genetic load. And at this point the behavioral traits are obvious.

S: Whose work do you admire?

TW: I admire Chuck Nelson’s creativity, his vision of focusing on the effects of deprivation on child development. I also admire the way Nancy Andreasen thinks about the brain – her multifactorial approach to studying the brain networks associated with schizophrenia. And I admire the way Irv Gottesman thought about research. And how, as a mentor, he was able to bring the things I read in literature to life and make them relevant.

Child psychiatrist Judy Rapoport of the National Institutes of Health has done phenomenal work on childhood schizophrenia. She showed that in terms of differences in the brain, it had very much the same properties as what you see in adults. It was just worse. She examined how these differences develop longitudinally – so what do you see as individuals get older?

Another work that I found really fascinating came from Klaus Gärtner, an animal scientist at the Hannover Medical School in Germany. He tried to standardize laboratory animals – breed animals that are genetically identical, and then see if, by strictly controlling their surroundings, they are essentially the same. Then could you see the effects of environmental changes on different systems including the brain? For example, what are the effects of a vitamin D deficiency?

And he wrote an interesting piece of work in 1990 that I think everyone should read, which essentially says that after 30 years of research it was unsuccessful: even though the animals were genetically identical and shared the same environment, they had organs of different sizes. So something else very early in pregnancy contributed to this variability. This influenced me in an attempt to understand that there is some degree of individual variability as a result of stochastic or unpredictable events in development.

S: What does a working day look like for you?

TW: Lately, during the pandemic, it looked like I mostly go for a walk after getting up. When I come back I’ll have breakfast and watch the news. And then I go through my email and then have hours and hours of video conferencing with PhD students or calls that are management related, such as data management issues.

In between calls, I try to allow time for stretches. And when I have to work on a manuscript or do data analysis, I block my time. We haven’t started our next wave of brain imaging because of COVID-19. We are now preparing for the start.

And then I usually go for a bike ride after work before coming back and having dinner. 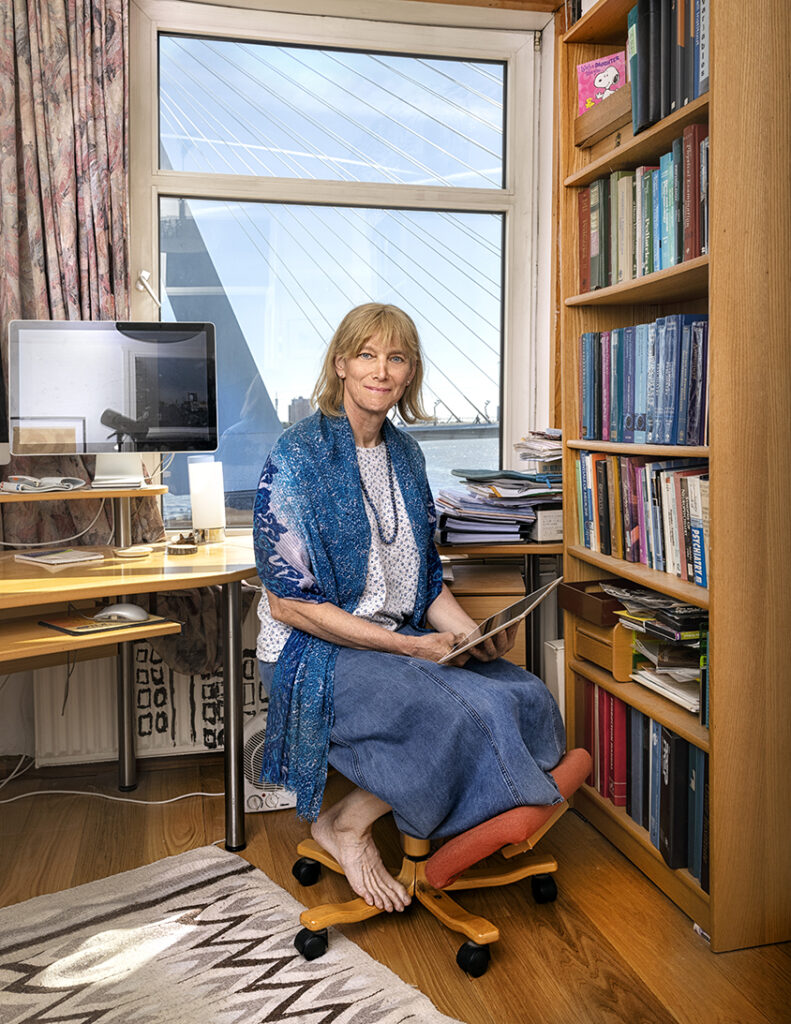 Pandemic pose: Despite her love of cycling, Tonya White sat in her home office a lot over the past year, a habit that blames her for her back pain.

TW: I have a number of routes that were often chosen to avoid traffic lights. I have a 15-kilometer lap, a 30-kilometer (19-mile) lap, and a 73-kilometer (45-mile) lap that I only do on weekends. On the weekends I sometimes skip the loop and go on a voyage of discovery.

S: When and where are you most productive?

TW: When I am writing scholarships or focusing on something, it is best to work at home, where there are few interruptions. I go into hibernation, so to speak.

I enjoy being at work at meetings. I like to go to meetings on foot, and I go with my PhD student during meetings. Students and postdocs. There is a certain hiking route that I do with one of my students. It is located on the “Brandgrenns” or “Fire Frontier” – the edge of the city where Rotterdam was bombed at the beginning of World War II.

When we talk about research, we look at history. We see on one side of the street the old buildings that survived the bombing and on the other side the buildings that were built after the bombing in May 1940. I think I’ll continue this type of encounter when the pandemic is over – the exercise and the walking and the opportunity to talk about research.

S: Do you listen to music or podcasts while you work?

TW: When I write, I cannot hear music with words. It disturbs my word formation. When I’m doing statistics, working in R or Python or statistical languages, I can listen to anything. I have this eclectic mix of songs. There is folk music as well as Fleetwood Mac, Goo Goo Dolls, Bob Dylan, The Beatles and The Cranberries.

When I cut vegetables or do other things, I listen to books on tapes. I’m listening to a trilogy by Ken Follett. I heard the first book, The Pillars of the Earth, in English. The second, “Endless World”, which I heard in Dutch, is about a pandemic in the Middle Ages.

S: Are you active on social media?

TW: Not as much as I should be. I check my twitter to see what comes in and I’m just overwhelmed. I want a direct plug-in for my brain: a USB port so that I can immediately access all useful information.

S: How many unread emails are there in your inbox right now?

S: What’s that painting on the wall behind you?

TW: My son painted it. It’s a tree, but people often think it’s a brain and I like that. It’s brain-like in some ways: the tree structure and the cortical border here and the white matter going up.

I have also decorated my apartment – on an island in the Meuse in Rotterdam – with works of art from other family members: watercolors from my mother and pen and acrylic paintings by my other two sons.

And I have a large painting that I made – of a place I really like in Utah called Delicate Arch. Over the course of a year, I regularly rode my bike to Hoek van Holland, a small town on the North Sea coast – for example 90 minutes drive from Rotterdam – and collected shells of different colors. One winter, I would spend about an hour each night crushing the clams while listening to a book on tape. And I used them to make the painting. I call it “painting nature with the colors of nature”.

S: What else do you do for fun?

TW: The things I do outside of work are generally outside. I love sailing and I love to sail a small boat. I have a laser. And when all the bigger boats arrive because it’s too windy, I like to go out because you can hum the sword and it’s really fun.

I ski in winter. And on most Saturdays, regardless of the season, I ride my Nordic Club roller ski. It is a way to imitate cross-country skiing when there is no snow. As I am also a trainer, I often give cross-country skiing lessons on Saturday mornings for those who want to try the sport.

And I read, but I don’t read books – I hear them because I read so much at work that I really just want to be read to.