The Manitoba government is trying for a second time to reform education in the province, but this time without planning to eliminate elected school boards.

The Progressive Conservative government faced widespread public opposition last year when it announced plans to wipe out all elected English-language school boards, and eventually backed down.

“We heard loud and clear from Manitobans that they didn’t want us to change the governance structure,” Education Minister Wayne Ewasko said Wednesday as he released his new plan.

A proposal to remove principals and vice-principals from teachers’ collective bargaining units is also being shelved.

The government is going ahead with some of the other reforms it had planned, which were based on an external review in 2019. The changes include setting up a new regulatory body that could certify teachers, but the details have yet to be worked out.

The province also says it aims to develop new ways to better assess students in early school years and to change report cards to be more inclusive of students with special needs.

The government is also looking to develop a new attendance policy that would take into account barriers such as poverty.

“I have heard of quite a few very successful schools that are working and … making sure that we’re inclusive and providing those equitable opportunities for our students,” Ewasko said. 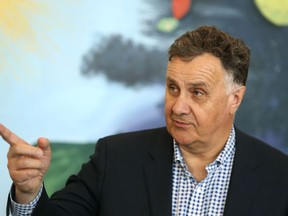 Brian O’Leary, superintendent of the Seven Oaks School Division in Winnipeg, said he foresees remote learning as a supplement rather than a replacement for in-class instruction.

“Remote learning resources will help students in smaller, more far-flung schools access some options that the local schools may be challenged to deliver,” he said.

This time around, the government’s plan is getting a warmer reception from some of the people in the education system.

“Today marks a positive step in the right direction based on partnership,” said Alan Campbell, president of the Manitoba School Boards Association.

The Manitoba Teachers’ Society said while a large number of details have to be hammered out, the general aim of the government’s plan is encouraging.

Bedford said he was disappointed, however, that the government is not enacting a universal school meal program.

Another unresolved issue is funding for the education system. The Tory government has promised to phase out an education tax on residential and farm property but has not yet said how it will replace the money.

The government set up an advisory group in the winter to come up with a new funding model and has promised to consult school divisions and other groups.