Early on in her first postdoctoral position, Hollis Cline demonstrated her characteristic flair for creative problem-solving.

Cline, who calls herself Holly, and her advisor, neuroscientist Martha Constantine-Paton, wanted to study the brain’s “topographic maps” — internal representations of sensory input from the outside world. These maps are thought to shape a person’s ability to process sensory information – a filtering that can go awry in autism and other neurodevelopmental disorders.

No one knew exactly how these maps came to be or what could possibly be disrupting them. Cline and Constantine-Paton, then at Yale University and now Professor Emeritus of Brain and Cognitive Sciences at the Massachusetts Institute of Technology, weren’t sure how to find out.

But as a first step, the pair decided to take the plunge with an unusual animal model: the frog — more specifically, a spotted greenish-brown species called Rana pipiens, or the northern leopard frog. The amphibians spend two to three months as tadpoles, a period during which their brains change rapidly and visibly – unlike mammals, which go through similar developmental stages in the mother’s body. These properties allowed Cline and Constantine-Paton to introduce changes and repeatedly observe their effects in real time.

“That’s an extended period of time where you actually have access to the developing brain,” says Cline.

The unorthodox approach paid off. Cline, 66, now a professor of neuroscience at the Scripps Research Institute in La Jolla, Calif., found that a receptor for the neurotransmitter glutamate, which has been shown to be important in learning and memory, also mediates how visual experiences affect the developing topography map . She later developed a novel live imaging technique to visualize the development of frog neurons over time and, while staying with frogs over the following decades, made fundamental discoveries about how sensory experiences shape brain development and sensory processing.

Such innovation and persistence characterize Cline’s prolific career — and have made her a particularly collaborative scientist, colleagues say. “One of the great things about Holly has always been her ability to work and find solutions to problems that others have made obstacles,” says Scott Fraser, a professor of biology at the University of Southern California, Los Angeles.

As a reward for her efforts, Cline served twice as President of the Society for Neuroscience in 2015 and 2016; has published more than 200 articles that have been cited more than 17,000 times according to Google Scholar; and has received several mentoring awards. And she continues to expand her scientific reach and innovation, including a recent turn to stem cell models in the search for answers about Rett Syndrome.

“There are no limits,” says Linda Van Aelst, professor of cancer research at Cold Spring Harbor Laboratory in New York. “She’ll do it if that answers a question.”

CLine’s love of the lab started early. As a child, she was fascinated by her mother’s work as a lab technician, which she began when Cline, the youngest of three children, started school. Cline was so anxious to be in the lab that she regularly pretended to be sick to miss school and catch up. (Her mother, who earned her PhD in biochemistry in 1965, let her get away with the ruse.)

Cline studied biology at Bryn Mawr College in Pennsylvania and planned to follow in her mother’s footsteps. But in 1977, during her senior year, she was taking a course in neurobiology and changed gears. “I absolutely loved it,” says Cline.

So in love, in fact, that she put aside her graduate school applications and instead accepted a position as a research technician in endocrinologist Martin Sonenberg’s lab at Memorial Sloan Kettering Cancer Center in New York City. She often crossed the street to attend neuroscience seminars at Rockefeller University. And by 1979 she was ready for graduate school – this time in neuroscience at the University of California, Berkeley, where another chance encounter turned her career around again.

Cline, who was studying the role of cell lineage in brain development, had to write a paper outside of her direct field of interest in order to complete compulsory schooling. Focusing on the development of the visual system, she encountered a question that would motivate her entire career: How does sensory experience affect brain development? After reading Constantine-Paton’s article on the evolution of the visual system in frogs in 1984, Cline decided to return to the East Coast in 1985 to study with her.

First, they decided to figure out how tinkering with the glutamate receptor changes visual system development in frogs, which other teams had demonstrated in goldfish and cats. They found that visual cues stopped shaping the map when they blocked the same receptor in photoreceptor cells in the tadpoles’ brains. In addition, the axons of signal-transmitting cells called retinal ganglion cells spread over a larger area, creating a more “scattered” topographical map.

Cline and Constantine-Paton proposed that visual input to the eye activates glutamate receptors on certain optic cells, prompting them to form, test, and reformulate the map’s connections. As compelling as the model is, it was based on still images of tadpole brains at different points in time. Without a way to observe the process in real time, Cline said, she felt she had to abandon her research. “That was a pretty dramatic thought.”

The solution came while flipping through the August 1990 issue of the journal Neuron, which contained a study describing a method for staining a frog’s neurons and charting how they grow and form connections. Cline ran to her phone and called Fraser, the study’s lead investigator, who offered to teach Cline his techniques. Cline also switched to a genus of frogs called Xenopus, albino specimens of which are transparent.

“I just remember reading this newspaper and I was like, ‘Oh my god, that’s amazing,'” says Cline. “It really opened up a whole new world for me, and I started doing everything in live imaging.”

ONEAfter a second postdoctoral fellowship in Richard Tsien’s lab at Stanford University in California, Cline established her first lab at the University of Iowa in 1990 and moved to Cold Spring Harbor Laboratory in 1994. There she developed a technique for introducing light-emitting molecules into individual frog cells. “Holly really pioneered this area of ​​in vivo frog imaging,” says Elly Nedivi, professor of brain and cognitive sciences at the Massachusetts Institute of Technology.

When Cold Spring Harbor Laboratory began hosting a series of meetings on Fragile X Syndrome in the 1990s, Cline began to see how her work could support studies of neurodevelopmental conditions. Among the participants was Michael Tranfaglia, a doctor whose son was recently diagnosed with Fragile X, a condition often accompanied by autism.

Tranfaglia’s mission was to convince developmental neuroscientists to study the syndrome. “One name kept popping up and that was Holly Cline,” he says. He convinced Cline to devote some of her time to studying how mutations in the FMR1 gene that cause Fragile X Syndrome affect brain development. 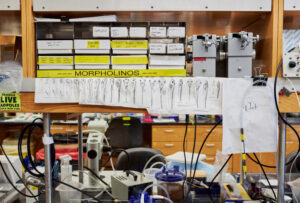 “That motivated me to be much more informed about different human conditions,” says Cline. “That was definitely very enriching for me.”

In 2008, Cline relocated her lab to the Scripps Research Institute, where she continues to oversee research on inhibitory and excitatory neurons and disorders in which their balance is disrupted, such as autism and related disorders. And in 2014 she discovered that frogs without FMRP make fewer neurons than frogs with working copies of the gene.

Since 2016, Cline has served as Director of the Dorris Neuroscience Center at Scripps Research Institute, an airy, open laboratory environment home to 11 scientists. She sees mentoring younger women as crucial, she says. Her lab meetings regularly include discussions on how to improve representation in science, and she has received both the Scripps Research Institute’s Outstanding Mentor Award and the Society for Neuroscience’s Mika Salpeter Lifetime Achievement Award specifically for furthering the advancement of women in received from science.

She sees her task as “to offer people the intellectual and scientific environment so that they can do the work that motivates them the most,” she says. “I truly believe that people function best when driven by their own inspiration and curiosity, and so I try to encourage that in my group.”

Cline actively encourages event organizers, grant committees and others in positions of power to include women in their programs, colleagues say.

Nedivi — who was a postdoc with Cline — says Cline taught her “everything.” Cline and Nedivi only worked together for two years, more than two decades ago, but Nedivi says she still considers Cline one of her closest friends. Others among Cline’s peers and alumni describe her as a respectful, supportive leader who does not see herself as superior to others.

As her scope of investigation and responsibilities have expanded, Cline says she continues to view herself as a basic researcher. Just as her work examining autism-related genes has elucidated some of the basics of the condition, it has also allowed her to gain a better understanding of the brain as a whole.

For example, studying Rett syndrome helped Cline answer a fundamental question about cell communication in the brain — a discovery that could in turn lead to treatments for the genetic condition that predominantly affects girls and is often associated with autism. She had heard a lecture by geneticist Huda Zoghbi, who discovered the gene that, when mutated, causes Rett Syndrome. Cline was amazed at how girls lost previously acquired skills in early childhood. 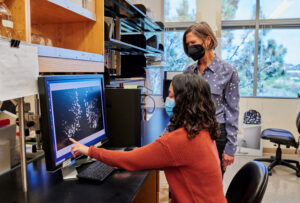 Admittedly, based on little more than a hunch – which she describes as “like an idea you have in the shower” – Cline theorized that the typical process by which brain cells exchange information using exosomes, or protein, DNA, and RNA packets go awry in children with Rett, leading to widespread regression in brain function.

To test the idea, she hired neuroscientist Alysson Muotri, who had built a human stem cell model of Rett syndrome. Their suspicion turned out to be true: in a shell, neurons with Rett syndrome form few synapses, but with exosomes from control neurons they thrive.

“The strategy in science is: you observe something, you see something happening, and then push to change it,” says Cline. “You learn something new based on how it responded to your pressure.”