Hard to see ’90s grunge band Foo Fighters are doing a vaccinated concert tour. Read a mainstream report here. In 2009, Foo’s drummer Taylor Hawkins generously donated his time and talent to a fundraiser for Generation Rescue and Age of Autism. Josh Coleman hosted a V is for Vaccine event outside of a Foo concert last week.

Music used to be the realm of youth revolt against the establishment. Every generation found children’s music scandalous. Music has brought us further into the civil rights movement, the women’s movement, the LGBTQ movement. Until 2020 when music became the tool of the establishment. It’s daunting at the extreme. Dave Grohl, what the hell happened?

Agoura Hills, CA – On June 15, 2021, medical freedom activists protested what they call discrimination and modern racial segregation outside the Canyon Club in Agoura Hills. The Foo Fighters held the first “vaccinated only” concert at the venue, which only allowed participants who received the COVID-19 vaccine. Concert goers had to show proof of vaccination against COVID-19 to enter the venue. This is the first of many pending events 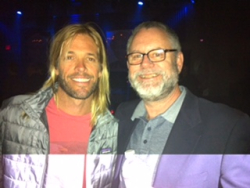 only guests who have received the COVID-19 vaccine can attend.

The protest was organized by the groups V is for Vaccine and FOR-US. Activists held signs with various messages. A sign read “EVENT FOR WHITES ONLY COLOREDS NOT ALLOWED”, but the word “WHITES” was covered with the word “VACCINATED” and “COLOREDS” with the word “UNVACCINATED”.

Among the dozen protesters was the actor and outspoken conservative Ricky Schroder, who said: “We cannot live in a country where people are separated and people are discriminated against who vaccinate and not vaccinate.” Segregation is defined as the act or state of separating someone or something from other people or things.