Many of us have been fighting for health choices and our parental rights for years. We did this alone, with less media coverage and support. In 2019 tens of thousands of healthy children in the United States lost their right to school because of religious vaccine exemptions. We marched in California, New Jersey, New York, Connecticut, and elsewhere. We were seen as a fringe group. Few outside of our community noticed. Those who did smeared us. Now, during Covid, Americans are forced to choose between taking a Covid vaccine or losing their job. In New York City, firefighters can get pink slips of paper today. FIRE DEPARTMENT. NEW YORK CITY FIRE MASTER. Six weeks ago we remembered the hundreds of NYFD who lost their jobs on and after September 11th. Like nurses and doctors at the start of Covid, first responders have gone from heroes to zeros. Let’s see what today brings.

Some of those present were vaccinated, but would generally take part in the protest.

The crowd filled an entire block of town on the Upper East Side from curb to curb.

If that number doesn’t rise by Friday, there are concerns that there may not be enough firefighters available to man the city’s 218 fire departments.

The union warned on Wednesday that after some failed negotiations with the city, emergency response times could slow to 15-20 minutes and lives could be put at risk. This is even possible with forced overtime. Source ABC & New York. 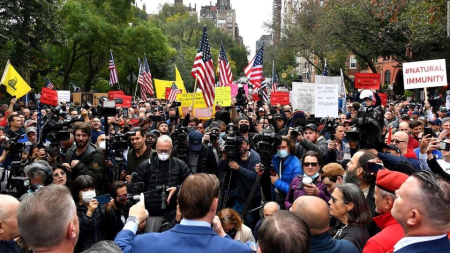