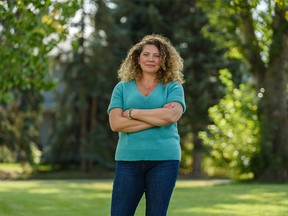 Medeana Moussa, executive director of Support our Students Alberta, poses for a photo on Tuesday, August 31, 2021. Photo by Azin Ghaffari/Postmedia

As public schools struggled with the fallout of the pandemic and increasingly depleted resources, critics fear the provincial budget will focus more on supporting charters instead of public schools.

Tuesday’s throne speech, two days ahead of the UCP government’s release of provincial funding for 2022-23, highlighted what critics called an increasing abandonment of public schools amid increasing support for charters.

“When it comes to education, it is clear this government’s goal is to privatize. And charter schools are a path to privatization,” said Medeana Moussa, spokeswoman for the Support Our Students advocacy group.

“They are not accessible to every child. They are exclusive clubs, run by private interest groups that are using public money, and parents are getting duped as though it is a better option.”

In Tuesday’s throne speech, Lt.-Gov. Salma Lakhani made no mention of public education, saying instead that Albertans have long supported pluralism as a key principle in the education system.

“That is why the government will bring forward a package of regulatory improvements to help create new charter schools and better support existing charters to realize the promise of the Choice in Education Act,” Lakhani said.

The act, created by the UCP government after being elected in 2019, lifted a previous cap on charter schools in the province, allowing for unlimited additions with unique programs, several of which have been recently approved in Calgary.

Although charters are publicly funded, Moussa argued they can be run by parents and volunteer boards, instead of publicly elected trustees as in the Calgary Board of Education or the Calgary Catholic School District. Charters often require admission applications and have long waiting lists for acceptance, she added.

But Lisa Davis, CEO of the newly founded charter STEM Innovation Academy, argued that charter schools are public schools, and calling them otherwise is false and divisive.

“We are public schools. We are publicly funded. Our volunteer boards are directly accountable to the minister and we must fill all the same requirements of the Alberta curriculum,” Davis said.

“This idea that charters are private schools is unfounded. We don’t charge tuition, full stop.”

Davis added that charters also support special-needs students, including English-language learners, although they only receive a quarter of the funding that public schools do for those supports. 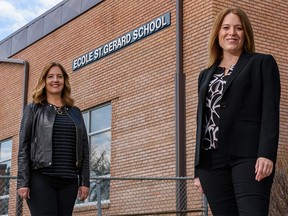 All Alberta students receive education funding on a per capita basis. But some school programs receive more funding through grants.

Still, the Alberta Teachers’ Association worries the province’s increasing commitment to charter schools will mean less for the public system, which is facing large class sizes in many urban areas.

ATA president Jason Schilling said adding teachers and support staff resources should be a priority in Thursday’s provincial budget, particularly after the loss of hundreds of psychologists and educational assistants in the early months of the pandemic.

“We did see in March 2020, many ed assistants and other support staff who provide really important supports to students just get laid off,” said Schilling.

“And we know that many of those folks have still not come back.”

Schilling added that as students deal with the fallout of two difficult years of COVID-19 effects, governments need to bolster supports to help them deal with learning losses and mental-health challenges.

“We are already seeing the effects of the pandemic on students. We’ve heard through our pulse surveys, teachers have identified mental-health needs as more important than ever.”

Last year’s provincial budget saw school districts across the province forced to settle for flat funding with only a slight bump in Alberta Education’s operating budget, going to $8.34 billion in 2021-22 from the previous year’s $8.32 billion.

Sign up to receive daily headline news from the Calgary Herald, a division of Postmedia Network Inc.

Thanks for signing up!

A welcome email is on its way. If you don’t see it, please check your junk folder.

The next issue of Calgary Herald Headline News will be in your inbox soon.

We encountered an issue signing you up. Please try again

Postmedia is committed to maintaining a lively but civil forum for discussion and encouraging all readers to share their views on our articles. Comments may take up to an hour for moderation before appearing on the site. We ask you to keep your comments relevant and respectful. We have enabled email notifications—you will now receive an email if you receive a reply to your comment, there is an update to a comment thread you follow or if a user you follow comments. Visit our Community Guidelines for more information and details on how to adjust your email settings.