Assembly Milestones on Time – It Makes a Distinction

Assembly Milestones on Time – It Makes a Distinction

I have a handwritten note in a folder that goes with me to every doctor’s appointment I make for my son. The paper isn’t that old. Well, in terms of today’s technological advances, it may be – it’s from a dot-matrix printer we used to own in the late 1990s. On it are the milestones my son was making. Those weren’t just memories I wanted to preserve; they were my guide to knowing that my son was, for a time, on time with his development.

Looking at the paper now, it’s clear that Ronan wasn’t hitting some childhood milestones. I knew that when I was jotting those notes down, not just because of later visits with the pediatrician, but because of my college studies. I majored in Human Development and Family Studies. My focus was child development, specifically early child development from birth to nursery school. I used that information about milestones for research papers as I entered my 20s. I cited it frequently after college and later into my 30s.

My teaching career had me engaged with children of all ages and with typical abilities. The very few students I encountered with special needs in the classroom tugged at my heart. While I couldn’t compare my life with them, nor their parents, I had basic knowledge of what support they needed to be successful students. Both in and out of college, I will be forever grateful for the information I learned and for the experiences I had. That helped me to know that I needed to leap to action as a young mother sooner rather than later.

The nagging feelings I started having about my own child’s growth and development proved helpful. Of course, the nagging part wasn’t so pleasant, but knowing that something wasn’t right gave me a reason to talk with our doctor. I seldom had to make an appointment for my first child, beyond the scheduled well-child visits, but I knew the option existed. When Ronan didn’t hit a major milestone while walking, I’d planned to make a call about his development by the end of that week. Luckily, I didn’t need to make that cold call. I ran into our doctor at the grocery store before my self-imposed deadline.

We lived in a small, rural town at the time and would see familiar faces wherever we went. One evening, while waiting in line to pay for my groceries, I looked up and saw the pediatrician. She had gotten in line behind us and said hello. Not wanting to take advantage of her personal time, I told her she was on my list of people to call that week. She quizzically said, “Oh? Is everything ok?” Fully taking advantage of her piqued interest, I continued, “Well, I think something’s wrong. Ronan’s still not walking.” Ronan had crawled on time and began to pull up on furniture on time, but he was still not able to stand completely on his own. I knew about late walkers, my daughter was a tad late to walk, but he was almost 16 months old. To me, that was concerning. Ronan was getting a little old for not being able to walk according to the major milestone list I’d studied years ago in school.

After a quick discussion and an unofficial exam while Ronan was sitting in the grocery cart, she said she’d have her nurse call me. Agreeing that something potentially wasn’t right, the doctor wasn’t sure if she could say what it was but knew that we should do something. I’ll always be grateful that I knew what to expect and that our doctor listened to me at the neighborhood Food Lion that night.

Within days, we were in the pediatrician’s office and then referred to early intervention services. More questions, more tests, more brainstorming, and then building the early intervention team would take weeks to coordinate. The prescribed therapies the team later determined Ronan needed didn’t start until months later. Like how milestones build one upon the other, so are the steps in the process to address the skills that haven’t been achieved.

It takes a lot of patience.

It takes determination, and sometimes demands, to get it all done as well. Parents aren’t always listened to. Even when they are, they don’t always get the best replies in return. The worst ones, besides a flat out no for a request a parent might make, is the “Let’s wait and see” reply. Had I been told to wait and see if Ronan would miraculously get up and start walking, he may have lost other skills. He did in time, thank you, begin to walk. But that did not happen until he was 2.5 years old.

I’ll never forget that day. We pulled up to our church for Sunday Mass. Hand in hand with my husband on one side and I on the other, Ronan let go and walked into church as if he’d been walking for years. It was breathtaking to see him finally so able and so confident on his own two feet.

That accomplishment was profound and one we’d been waiting a long time to celebrate. It was back to work that next day, though, with therapists, the special education team, and some caring caregivers. While working tirelessly with the physical therapist and more professionals, we’d see that other skills, reflexes, and typical developmental markers were also concerning. The longer it took Ronan to accomplish what his typical peers could do, the more we depended on the team to help us. Most were pleasant to work with. They’d teach me what we could do at home and find ways to involve the family. Some were not so pleasant and made therapy or follow-up testing frustrating. That’s why I’d stay current with what was happening in the child development world. If I knew what to expect next, I could better advocate for my son.

I would suggest the same for today’s parents. But I wouldn’t use today’s updated milestone standards.

Not to sound like an old fuddy duddy, but that expression, “Back in my day…” comes to mind as I think about what parents today could do when they look at how their child is (or isn’t) developing. The newly published data glosses over some items that were an on-going standard. They extend the timeframe of when other skills should occur. In the beginning, I’d always adjusted the milestone markers an extra month because Ronan was premature, but what’s expected now is well beyond some of that typical timeframe. That timeframe is critical, not just for the child’s development but for when to get the ball rolling if, and especially when, intervention is needed.

That extended time will delay a doctor’s response.

That then delays when a therapist or educator will be consulted.

That then further delays any scheduling of therapies or interventions.

That can compound the child’s frustration and the parents’ need for their own support.

What can today’s parents do? Look at the milestone charts we used. Adjust for prematurity, if necessary, and compare what your son or daughter is doing now. Then, use the knowledge we “old” folks have been sharing so that you don’t have to live the reality we did and that some still do. If your children are not meeting milestones, I’d begin the process of seeking help now.

Time truly is of the essence.

If my son’s development was measured by today’s tools, I can’t imagine how long it would take to get a proper diagnosis. I can’t imagine the waitlists that’ll exist in the near future when today’s children begin to fall off the new charts like mine did. I remember years ago asking, along with other parents, where’s the outrage from the well-established and retired pediatricians when the autism numbers began to rise. The United States had carried the 1 in 10,000 statistic for autism for many years. Some doctors did address the growing concern of how many were so quickly falling onto the spectrum, but the majority, it seemed, didn’t. Instead of a gee whiz reaction, like what is going on with this cohort of humans, the CDC calming chalked it up to ‘better diagnosing’. That became a narrative when the rate increased and continues even now.

I wonder if the same relaxed attitude will follow the CDC’s quietly changed milestone expectations.

I’m quick to forget that the CDC’s full name includes prevention (Center for Disease Control and Prevention). Imagine if we could prevent some of the delays that already exist. If delays could be prevented, the need for interventions would decrease. We’re at an all-time high for children needing something, be it a therapy, accommodation, or medical intervention, to get through childhood. Will the CDC and other organizations work to help prevent or reduce that need, or will they just continue to document that it’s happening?

Today’s children are being bombarded with much more than other children have previously. Screens are everywhere, the internet is accessible at all times, some schools are overcrowded, underfunded or are dealing with teacher shortages, and it seems that life stressors have increased exponentially. Parents are feeling bombarded too. What can a parent do to combat the constant busyness of today’s world is throwing at them and at our youngest citizens? If it were up to me, I’d prescribe more playtime, more opportunities for face-to-face language development, more healthy food options and intake, more time off screens, and more time exploring the natural environment outside.

I don’t just wonder if it’s some of that could make a difference.

I know it would.

And not just for a child’s physical growth, but for the families’ emotional and mental health as well.

Maybe if we go back to simpler times, things could improve for this and for future generations. I can only hope stepping away from what is potentially causing problems now can do the something positive for children’s futures. That may not be the best answer or what some people want to hear, but it’s a simple start. Just like when my son took that first independent step by himself on May 1st all those years ago. It was a start that eventually lead to other gains. Childhood is about making gains, one meaningful accomplishment at a time. I hope and pray that kids today get the chance to experience that.

Cathy Jameson is a Contributing Editor for Age of Autism. 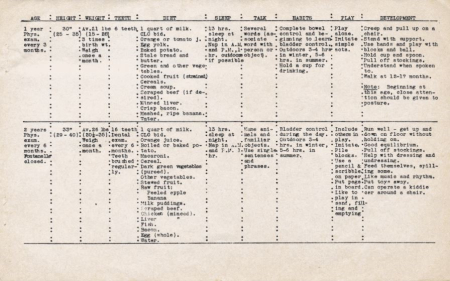 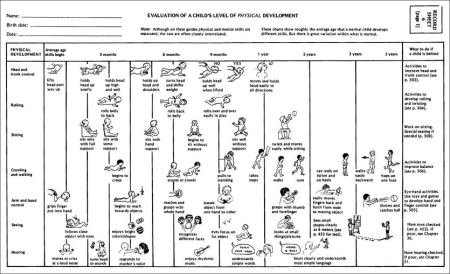 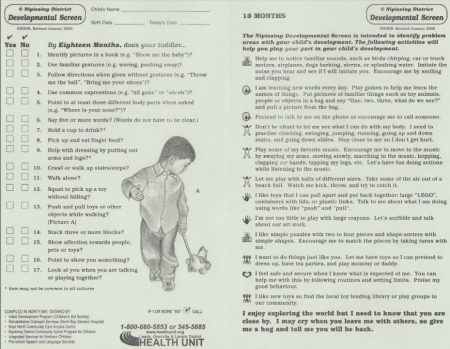 Additional guidelines from this group, found in a new document, was updated in 2011.

Video describing why reaching previously set milestones is important, posted less than a year ago in April 2021

Should parents have concerns or see any red flags in their child’s development, they can consult with their doctor and contact their states’ early intervention program. If eligible for services, funding for therapies and educational services can be provided through the Individuals with Disabilities Education Act (IDEA). Pacer is one of many groups who work to educate parents on the process. If you have had success on your journey or within your region, add a link below so that families new to our community have a starting point.